Probably no building in New-York was better known, inside and out…
—David Scobey, Empire City, 2002

From 1841 to 1865, Barnum’s American Museum stood at the intersection of Broadway and Ann Street, a landmark for locals and tourists alike. Thanks to advancements in imaging techniques, artists were able to make great use of this impressive edifice in lithographs, photographs, stereographs, and more, although depictions of the corner vary greatly because of technical changes and the different ways in which contemporaries viewed the building and its surroundings. The 1865 fire that destroyed the building was itself memorialized in various ways, with some celebrating the end of Barnum’s reign as the king of humbug (Barnum’s definition for his hoaxes and hype) and others lamenting the loss of the iconic entertainment attraction. 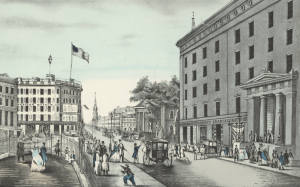