The oldest church building still standing in Manhattan, St. Paul’s Chapel was completed in 1766 between Fulton and Vesey Streets on Broadway as the uptown chapel of Trinity Church. During the nineteenth century, the once-massive edifice saw its neighbors growing larger, but its steeple remained conspicuous in lower Manhattan, even serving Henry Papprill as a vantage point for his 1848 view of Broadway. Images of this landmark show the evolution of fashion and the buildup of activity, as this busy section of Broadway moved from being an elite residential sector to a middle-class stretch of road that catered largely to entertainment seekers and shoppers. 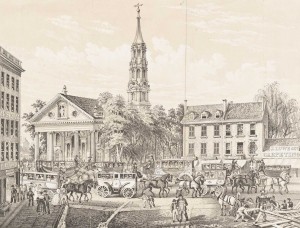