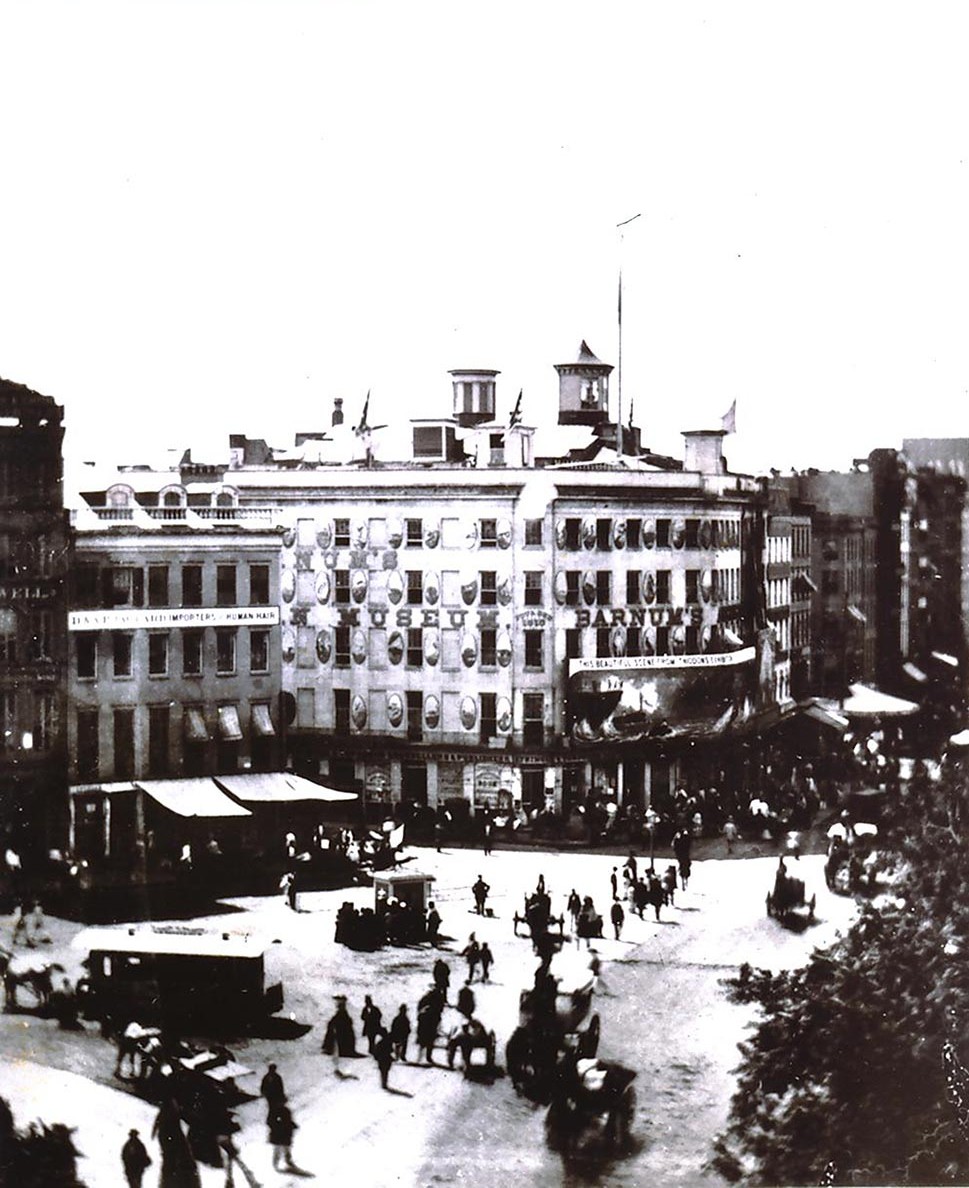 During the nineteenth century, the legendary showman P. T. Barnum helped make New York City into the capital of urban commercial amusements in the United States. His various forms of entertainment reached millions of people through museum visits, popular performances, print publications, and word of mouth, but he is best remembered for his effective salesmanship in promoting his exhibits, especially those at the museum and the circus. Known to write scathing reviews and critiques of his own efforts in order to attract attention, Barnum was a master at creating popular interest and public spectacle. At his American Museum, first located at the intersection of Broadway and Ann Streets and later moved up the block to the corner of Fulton Street, melded high and low culture into a popular attraction that the vast majority of Americans were interested in experiencing (fig. 1). In searching for the common denominator between the working poor and the rising middle class—and one that would maximize his profits—Barnum created the first democratic, middle-brow entertainment in the city. His legacy of accessible amusements made a lasting impression on nineteenth-century culture, the echoes of which can still be seen today in New York City’s spectacular amusements.

Phineas Taylor Barnum was born in 1810 in Bethel, Connecticut; he grew up on a farm, and tried various professions, including shop keeping, lottery running, and even selling Bibles, before he moved to New York in 1834 to embark on a career in entertainment.1 Before acquiring John Scudder’s American Museum in 1841, Barnum entered the entertainment business when he purchased and exhibited Joice Heth, an elderly slave woman purported to be 161 years old and George Washington’s nursemaid. Barnum learned early on that “crusading was good for business” and that people were drawn to controversial topics, eager to prove to themselves that they could determine truth from falsehood.2 Buying the American Museum inspired him to sharpen his promotional skills in order to attract the largest possible audience. Barnum added to the cacophony and spectacle of Broadway as described in so many travel accounts and guidebooks by hiring a band to attract attention, putting on ridiculous stunts in front of the museum building, and adorning the sides of the building with large paintings of animals and other attractions that could be found within.

Barnum believed that any publicity was good publicity, and he was quick to realize the potential of the newly affordable publication opportunities. He continued his tried-and-true method of writing to newspapers anonymously claiming that the exhibits were fakes. Embracing his designation as a humbug, Barnum styled himself the Prince of Humbugs. The methods he used in spinning a story—by leaking “controversy” when tickets sales died down or by asking members of the public to decide for themselves if an exhibit was a hoax or not—were expertly employed by the showman but were not entirely new. Seventeenth- and eighteenth-century entertainments often contained an element of trickery, and Charles Willson Peale’s museum in Philadelphia was not without its surprises.3 Audiences in the middle of the nineteenth century, especially in New York, were facing new economic and social realities, with ever-changing commercial practices and an ever-expanding city, in which diverse new populations led to an increased suspicion of strangers. The label “humbug” was a product of the times, as people were looking for authenticity and finding trickery.4 Although Barnum’s humbugs were enjoyable, they fell uncomfortably into line with fears of the imposters and counterfeits of all kinds that the growing city included in its ranks. 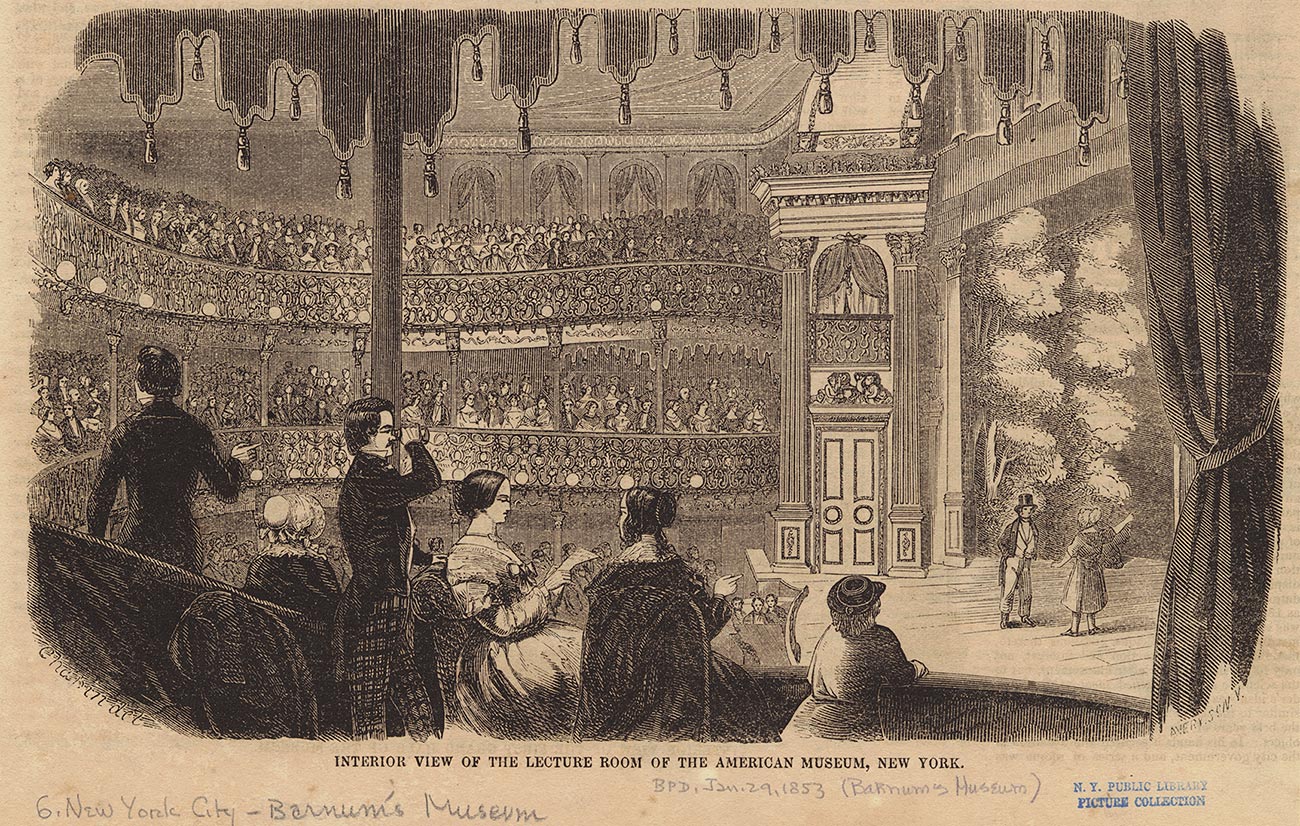 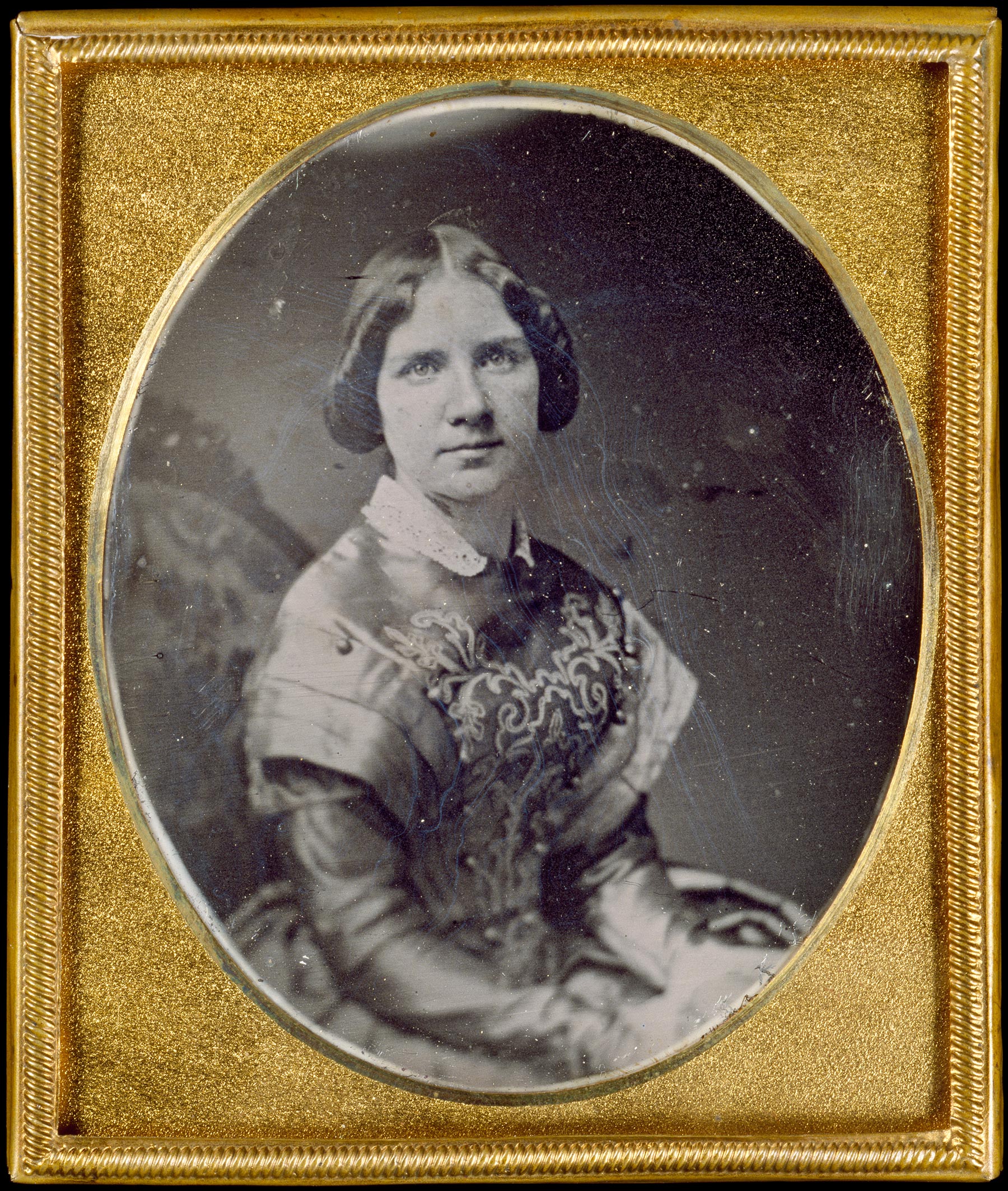 One of Barnum’s great achievements in his museum was the transformation of low and high culture into an entirely new hybrid creation. The swiftly increasing middle class could now enjoy both working-class and upper-class entertainments. Barnum pulled from all available sources to showcase sideshow acts, science lectures, oddities, and educational displays together in the same museum (fig. 2). Charles Sherwood Stratton, better known as General Tom Thumb, was an adult dwarf who never measured over three feet, four inches in height. Traditionally, he would have been displayed in a sideshow exhibit for working-class audiences in open-air venues, but Barnum created a sensation out of Tom Thumb’s civility and nobility by taking him on tour, meeting the Queen of England, and throwing a wedding for his equally tiny bride, Lavinia Warren. Eager to see this diminutive “general,” visitors from all walks of life came to see him at Barnum’s American Museum and other venues. Moral and scientific lectures were highly popular with both the upper class and the rising middle class, which were all eager to improve themselves. Barnum’s lecture hall proved to be a popular venue for lectures on temperance, morality plays, and musical theater. The theater had long been viewed with suspicion for its questionable associations, but Barnum, through the strength of his personality and the connection with his museum, was able to rehabilitate theater as an entertainment for the masses. He engaged Jenny Lind, the immensely popular “Swedish Nightingale,” for an exclusive tour of in the United States (fig. 3).  Despite her career as a European opera singer, which was deemed a dubious profession by most of society, Barnum drew huge crowds for every performance by emphasizing her morality and youthful innocence.  By making upper-class entertainments accessible to the masses, especially the upwardly mobile and striving middle class, and by elevating the traditionally working-class entertainments, Barnum created the roots of mass commercial culture in America. 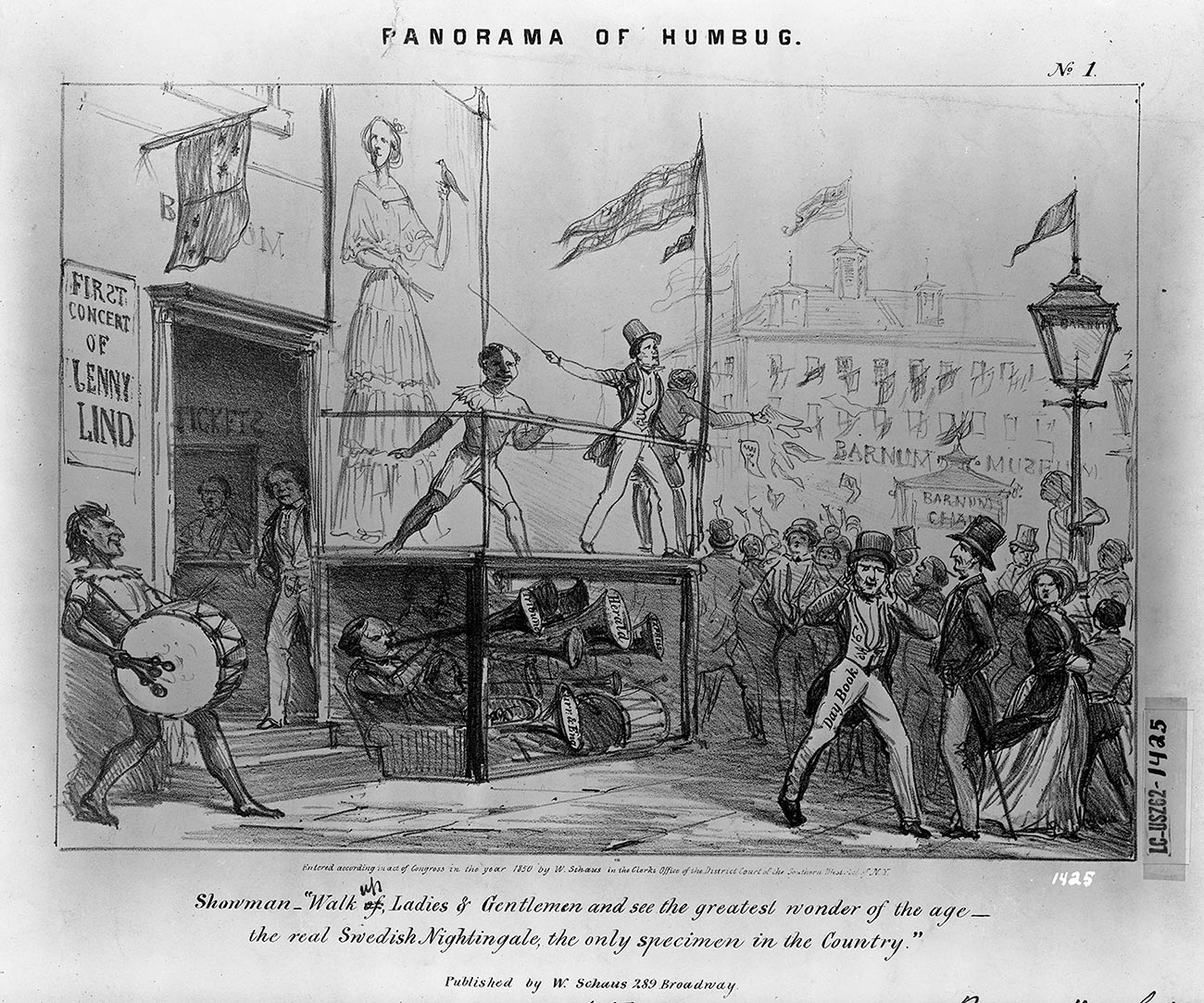 Fig. 4  William Schaus. Panorama of Humbug, No. 1, ca. 1850. Lithograph. Courtesy of the Library of Congress Prints and Photographs Division. 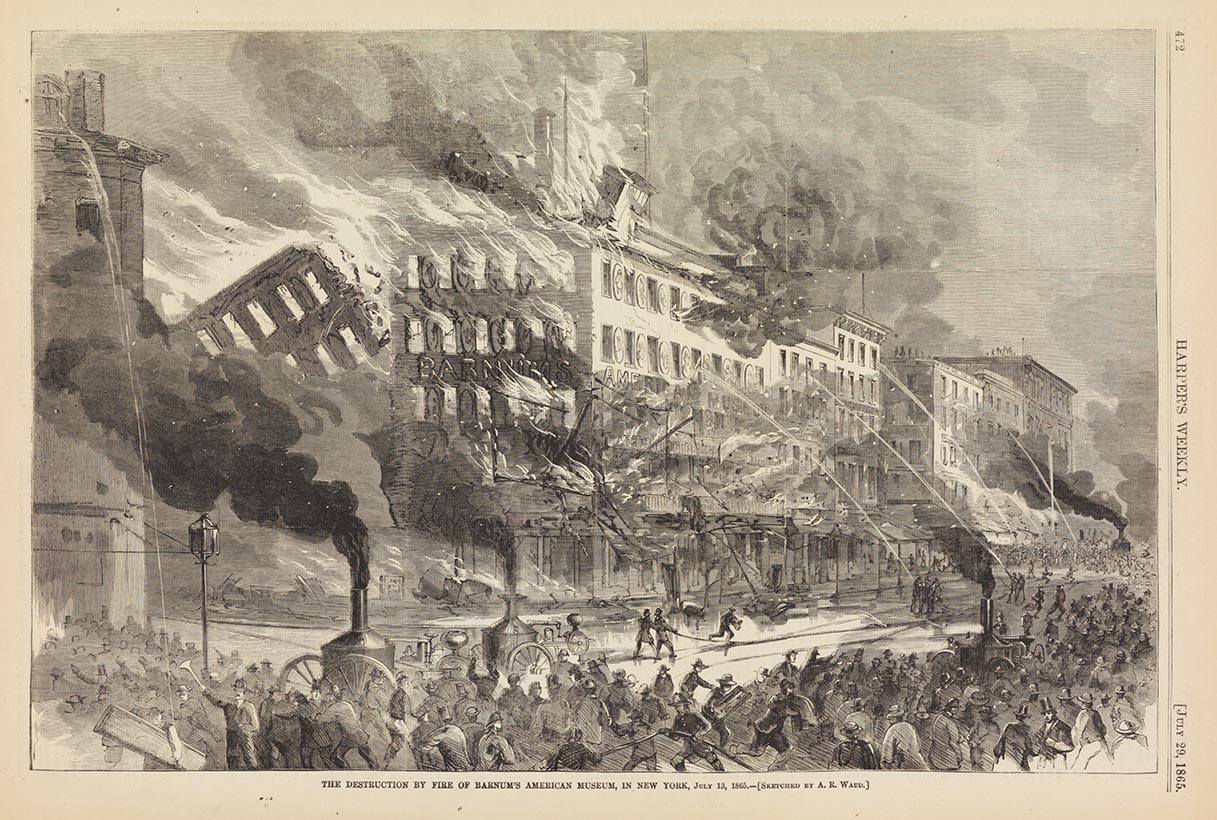 Barnum’s American Museum on Broadway stood as the cornerstone of his work in creating an audience for popular culture. By all accounts, people from all walks of life were interested in attending the exhibits there, especially when twenty five cents entitled one to a day at the museum, including all the music, festivities, and spectacle available. In addition to his paying customers, Barnum reached many others with his publications, which ranged from articles in newspapers and prints to his autobiography, a best-selling book from the time of its original publication in 1855. And, of course, the popular press lavished attention on his entertainments. Jenny Lind’s tour in particular received both acclaim and critique in the hand of Barnum’s publicity machine (fig. 4). The museum building and its contents were such a spectacle that its destruction by fire in 1865 and that of its successor in 1868 were highly publicized (fig. 5). Images of the event made the rounds of the illustrated newspapers and periodicals, and it even became the subject of large works of art. Some lamented the loss of the museum and its contents as a popular attraction and an important landmark of antebellum New York culture, but others celebrated the destruction of what they saw as a vulgar excuse for a cultural entertainment.5 “That respectable people never went to this so-called museum we do not assert. There were hours in the day when the halls were nearly empty; and, where certain shells, stuffed birds, and Indian relics are, there is always something to see. But we hold that the class of students of whom we have spoken deserve better mental fare than this dreary refectory could afford.”6

Barnum responded to this criticism as he always did, boldly and publicly. He discussed how his intended audience could not support his museum with donations: “Hence, to make it self-supporting, I was obliged to popularize it, and while I still held on to the ‘million of curiosities,’ millions of people were only induced to see them because, at the same time, they could see whales, giants, dwarfs, Albinoes, dog shows, et cetera. . . . Humbug with me has had its day, and although I always gave the money’s worth of that which was not demoralizing, I often grieved that the taste of the million was not elevated.”7

Museums that came after Barnum’s American Museum were more closely aligned with late nineteenth-century values and more socially differentiated audiences.8 The American Museum of Natural History, founded in 1869, and the Metropolitan Museum of Art, founded in 1870, were created to provide a different form of entertainment and to appeal to different audiences than Barnum’s museum. Scientific inquiry and artistic excellence rather than popular speculation and controversy drew audiences to these new institutions. Tom Thumb and Jenny Lind, along with countless other human specimens whom Barnum hired for display or to perform for audiences, may have represented opposite poles of class appeal, but under Barnum’s wing, the two were more aligned in the public’s mind than one might at first assume. Barnum’s legacy of truly middle-class entertainment shaped Lower Manhattan and New York City culture, especially the section of Broadway where one could find his museum, Brady’s daguerreotype gallery, extensive shopping venues, and many other affordable and respectable pastimes. Although one may not believe Barnum’s endless claims to fame, there is no reason to doubt that his contributions to entertainment in New York City during the middle of the nineteenth century were unique and contributed to the creation of the commercial culture of Broadway.