Peter Maverick. “This Map of the City of New York and Island of Manhattan…/ Wm. Bridges, city surveyor; engraved by P. Maverick; entered …Novr. 16th, 1811,” 1811. Engraving on six sheets. Courtesy of the Library of Congress Geography and Map Division.

Receding from the chaos of the street, maps erase the city’s complexity and social divisions and provide a consoling visual sense of stability. The map’s frame is equally important to understanding the order it portrays1, as the five prints illustrating this essay confirm. Although maps of nineteenth-century New York, defined by the gridwork of the Commissioner’s Plan of 1811, appear at a distance to be rationally structured, the social and physical landscape was in constant flux of redefinition as the city evolved from port to Empire City (fig. 1). The iconographic depictions of façades of important buildings literally and figuratively frame the city in these prints, standing as symbols of the transformation taking place in the urban environment and its citizens. The growing body of nineteenth-century printed media established a common visual language of the city’s most important landmarks through the circulation of similar views in various printed formats. Their consumers included boosters as well as middle-class men and women who were grappling with their own performance in the urban environment. City living required civilizing, a process that allowed “a citizen; that is—the inhabitant of a city,” to live responsibly and effectively with one’s neighbors and supported “the quality or condition of cultivating the ability to live with style,” as suggested by the Putnam Monthly in 1855.2 Citizenship combined the moral and civic virtue of republicanism and, by the antebellum period, cultural sophistication. The architectural portraits in these prints not only depict places in the civic landscape, but they also express the values of their civic culture. They confirmed and reinforced New York’s emerging role as modern metropolis.

Fig. 2  Topographical Map of the City and County of New-York, and the adjacent Country: With Views in the border of the principal Buildings, and interesting Scenery of the Island, 1836. Engraving on three sheets, published by J. H. Colton & Co. Courtesy of the Library of Congress Geography and Map Division.

J. H. Colton’s map of 1836 depicts the city on the cusp of its greatest period of expansion (fig. 2).3 At the southern tip of the island are gray blocks of the “Section of the City built,” which fade into a white grid around Fourteenth Street, where streets are “Opened or being regulated,” and after Forty-second Street are “Avenues est. by Ordinance” yet to be built. The northern portion is a mostly natural landscape dotted with “Country Seats and Ornamental Gardens,” once the primary homes of the patrician class. Broadway from the Park, the image at bottom center of the map, is based on one from Views in the City of New-York and Its Environs Parts published in a bound volume of 1831.4 The publication’s sixteen views captured and promoted the city’s architectural beauty, economic power, and cultural pride. In the Colton map’s Broadway from the Park the draftsman added the Astor House, completed in 1836, which stood at one of the period’s busiest intersections and was noted for such extravagances as gas lights, running water, seventeen bathrooms, and two showers. The building is juxtaposed with a vignette of “Nieuw Amsterdam, 1639” underlining the physical and technological growth of the city, which the frame reinforces.5

The border of “the principal Buildings and interesting Scenery of the Island” was adapted from another published volume, The Bourne Series of Views of New York City.6 Three cartouches depict institutions of reform: the Halls of Justice, the Deaf & Dumb Asylum, and the Female Orphan Asylum Bloomingdale. In the 1830s and 1840s, questions emerged about the role of civic and moral virtue in the modern metropolis, as the face-to-face relationships of the colonial period dissolved into the atomistic networks of city life. The emergence of reform institutions tempered the anxieties of middle-class and upper-class Americans about the disorder they perceived as a result of urban growth.7 As traditional models of relationships broke down under the pressure of the wage-labor capitalist system—illustrated and glorified here by the inclusion of Barclay Street Landing, Landing Cortlandt St., Custom-House Wall St.—new institutions were developed to reform those seen as failing to make the transition into republican citizens.8 Prisons and asylums did not merely house troubled members of society, but they also attracted tourists, as attested by their frequent appearance in guidebooks. Like framed maps, guidebooks used the individual to stand in for the whole and selected places to represent the institutional structures that defended the moral republican social order, thus allowing the metropolis to function.9 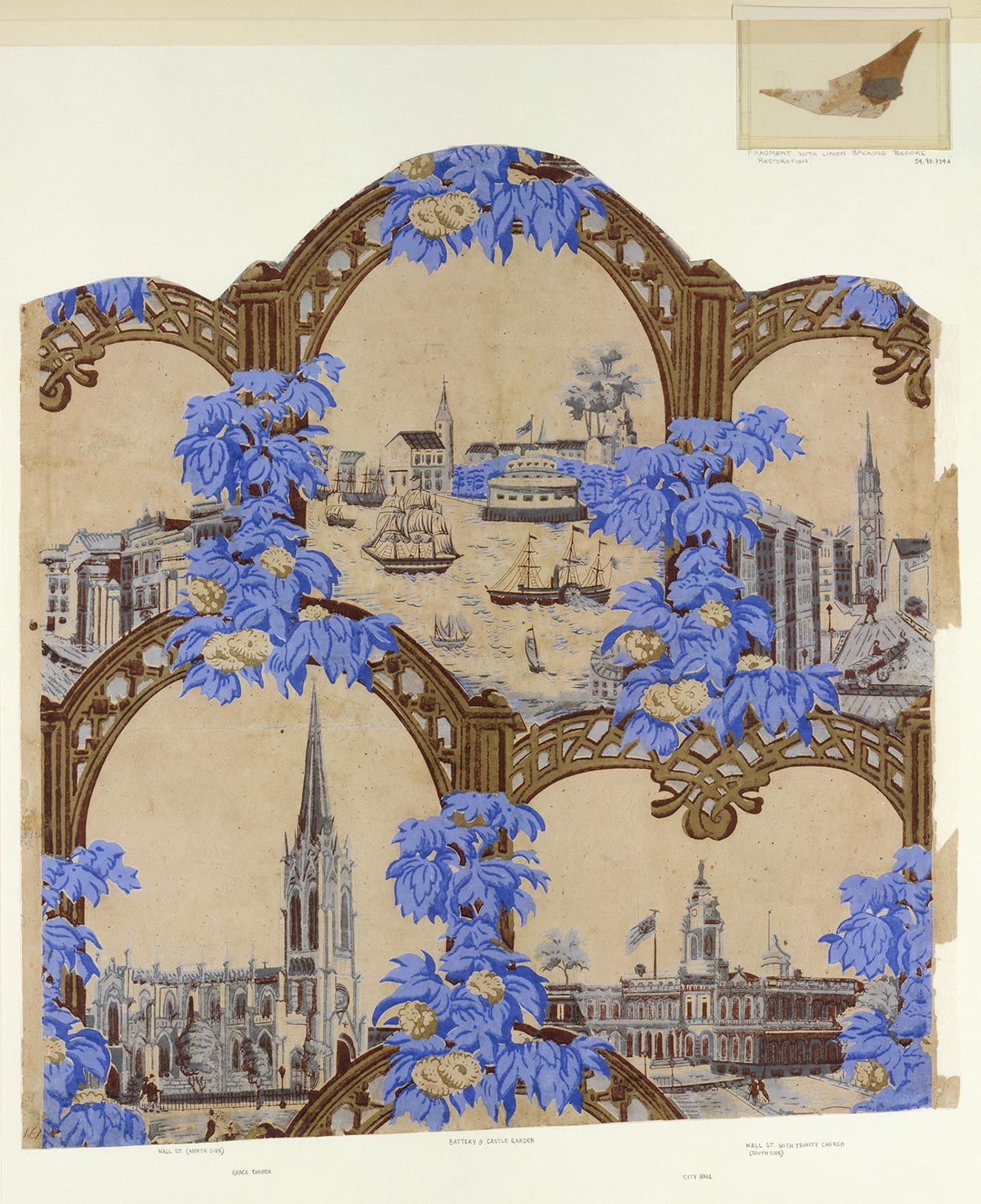 Like the Colton map, the wallpaper in figure 3 depicts communal, commercial, and religious landmarks that marked New York’s early transition away from the port city: Wall Street, the Battery and Castle Garden, Trinity and Grace Churches, and City Hall. Here the urban environment has been softened by its wooden lattice-work frame complete with purple foliage. The integration of natural landscape into the city, like institutions of reform, was meant to reconcile the perceived ills of the city. A room papered with this design might at a distant glance seem to be like viewing a bird’s-eye lithograph, with outlines of orderly places. Closer inspection reveals the architectonic details and fashionable people borrowed from prints or illustrated magazines, which served as sources of images for many wallpaper manufacturers. The depiction of Grace Church is very similar to a print in Broad-way from Nature by Augustus Köllner (see fig. 1 in Friedman-Stadler “The Spectacle of Downtown Broadway”). Technological changes between the 1820s and the 1840s allowed for a transformation of American wallpaper from a handicraft into a commercial good accessible to multiple levels of society, thereby spreading good taste into the humblest of homes.10 Wallpaper was thus aligned with other visual household commodities, including prints and stereoscopes, which confirmed the refinement that was felt to be central to the developing middle-class identity. 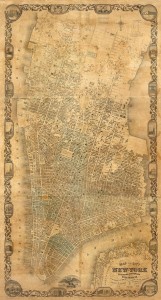 The Matthew Dripps map of 1852 presents the density of the civic landscape in a different way (fig. 4). Over seven feet long and nearly four feet wide, the map presents an impressively detailed view of individual lots and buildings from the southern tip of the island to Fiftieth Street,11 and with greater detail than Colton, documents the importance of real estate development to the growth of the city. As the Commissioner’s plan noted, “a city is to be composed principally of the habitations of men, and  . . . straight-sided and right-angled houses are the most cheap to build and the most convenient to live in.” The southern portion of the island is a dense gray, indicating the closely packed built environment, and as one moves northward, the rectangular lots include yards along with buildings. In these patterns we can see the growing social and class divisions within the city that developed as middle and upper class residences moved northward and away from places of production. 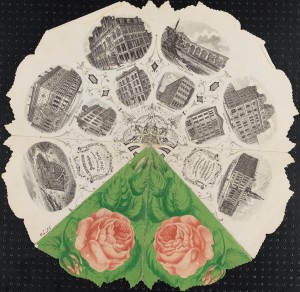 Mid-century was a time of massive “pulling down and putting up,” as the diarist George Templeton Strong wrote, and he foresaw that this “will make this a new city within ten years.”12 As it spread north, New York’s architectural language became self-consciously monumental and opulent, announcing the city’s place on the world stage. Although the cartouches of the Dripps map contain some buildings featured in Colton, such as the Customs House and the Halls of Justice, the façades also illustrate evolving architectural styles. Examples include the Anglo-Italianate Odd Fellows Hall designed and built on Grand Street by Joseph Trench and John Butler Snook between 1847 and 1848, or the Venetian-Gothic Revival National Academy of Design, erected at Twenty-third Street between 1863 and 1865 after a design by Peter Bornet Wight. Both structures are also depicted on a fan published by C. Heerbrandt in the 1870s (fig. 5). The multitude of revival styles gave architectural form to the civilizing activities taking place within the buildings. Outward appearance in both dress and comportment was incredibly important to nineteenth-century New Yorkers, and the façades of buildings similarly proclaimed the virtue of activities taking place inside. As John Kennion wrote in 1868, “the beauty of our modern metropolitan architecture” provides “evidenc[e] not alone [of] our past and present progress, but an unerring index as well of our city’s future greatness.”13

By mid-century, institutions of learning, libraries, and theaters became increasingly important as means of acculturation that would aid the professed westward course of empires, whereby arts and culture in the decaying and corrupt Europe would migrate and flourish in America.14 The Dripps cartouches depict the New York Free Academy, established in 1847 to train students, not in classical education but in the “productive pursuits of life,” thus raising up “a class of mechanics and artists . . . eminently qualified to infuse into their fellow-workmen a spirit that would add dignity to labor” and make them better able to appreciate republican institutions.15 Intellectual life, represented in the Dripps map by the inclusion of New York University at Washington Square, was a means of securing cultural authority for the elite classes. The Renaissance Revival Astor Library, which opened in 1854 as the city’s first free library, appears here as well as on a print by John Bornet (fig. 6). Although the library was open to the public, its daytime hours excluded working-class people. Both Bornet’s print and Heerbrandt’s fan demonstrate the evolution of the theaters: Astor Place Opera House (1847), Booth’s Theater (1867–69), and Steinway Hall (1866). At the center of Bornet’s frame and at the edge of Heerbrandt’s fan are bird’s eye-views of Manhattan Island, packed with buildings and expanding into a distant horizon. Unlike the maps by Colton and Dripps that illustrate a transforming landscape, Bornet and Heerbrandt depict an envisioned city, completely built and asserting its expanse. 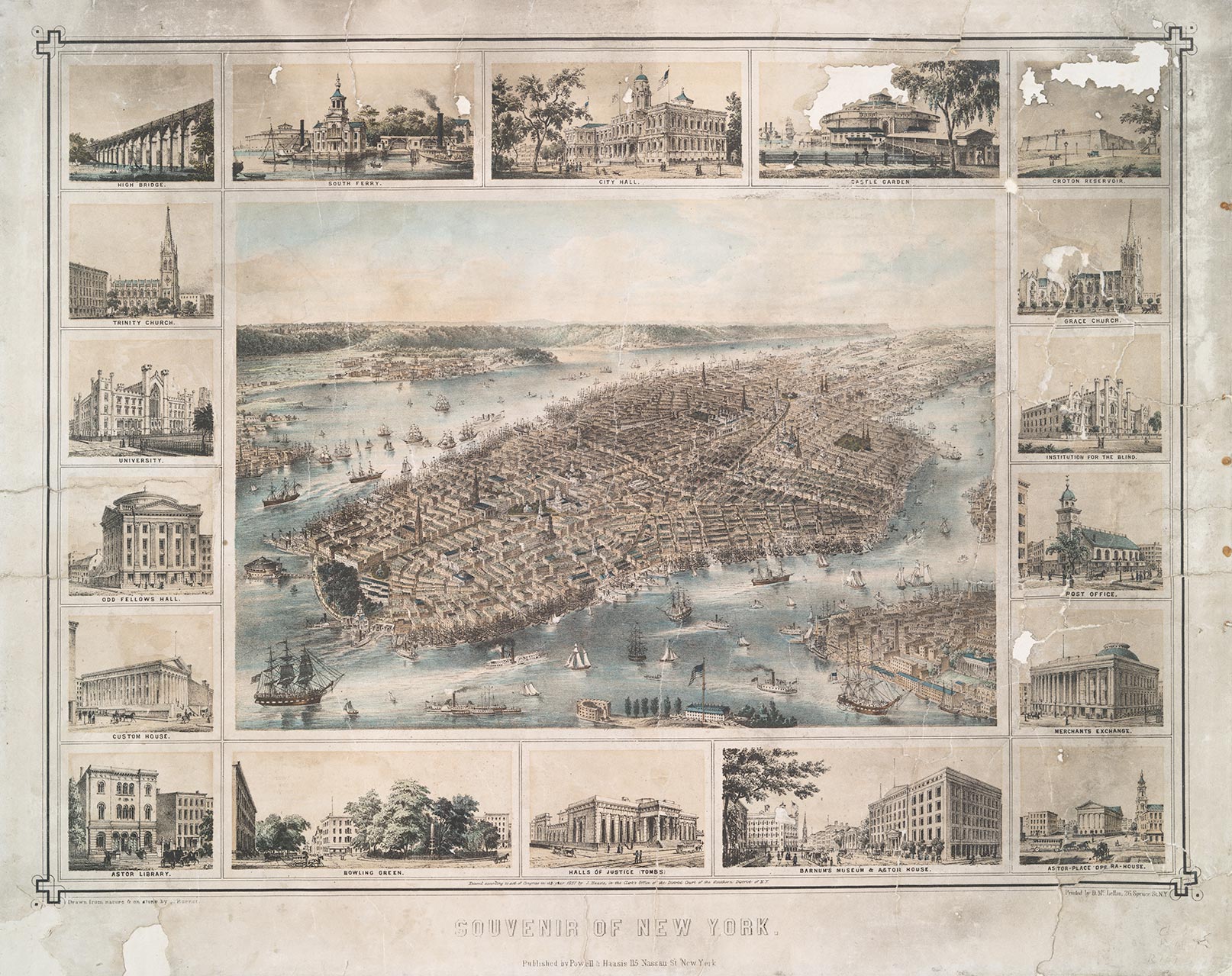 In these printed objects we see the city in transition seeking to define itself in a multitude of ways. The façades function like guidebook descriptions, emphasizing buildings, and later architectural grandeur, as symbols for the institutional structures behind them, stand-ins for order and urbanity. Institutions of reform, according to Phelps’ Strangers and Citizens’ Guide to New York City (1859), were “like green oases, in the midst of a desert of selfishness incident to the progress of a great city.”16 And Putnam Monthly described the challenging task of great cities to be not just the accumulation of wealth but also the cultivation of culture. “The absorption of all the mental power of a community in mere trade and traffic, in buying at one price and selling at another, in huckstering and drumming, and skinning and shinning . . . tends not to the swiftest and greatest development of the sort of human being called by the Romans civis and urbanus—by the Greeks ho polites—‘the citizen.’”17 Institutions helped to frame that process of civilizing, expressing and constructing social relationships within the built environment. In these prints we see that the depiction of these places also became tangible, possessable, material commodities that equally constructed New York’s identity through individual ownership while also serving everyday uses.