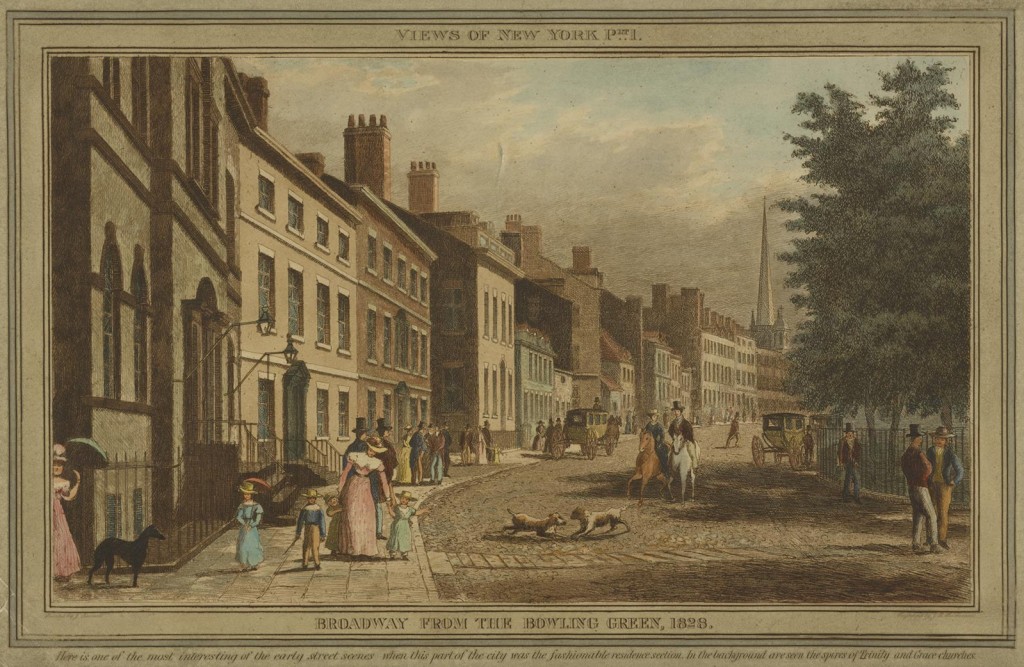 Images of early nineteenth-century New York frequently featured a placid harbor view with the steeples and shores of Manhattan in the background or a genteel street view with upper-class figures (fig. 1). By the 1870s, those scenes had changed. The 1875 Broadway by Currier & Ives (fig. 2), for example, shows a teeming, chaotic jumble of pedestrians and vehicles seen from above. Images of the city at street level reveal a new fascination with the deprivations endured by those who lived in the Bowery, in the Five Points section of the city, the crime sweeping through those neighborhoods, and with interior views of places such as tenements that were unseen by the rest of the population, (see Brow, “Fashion and Urban Living”; Fister, “Sunshine and Shadows”). 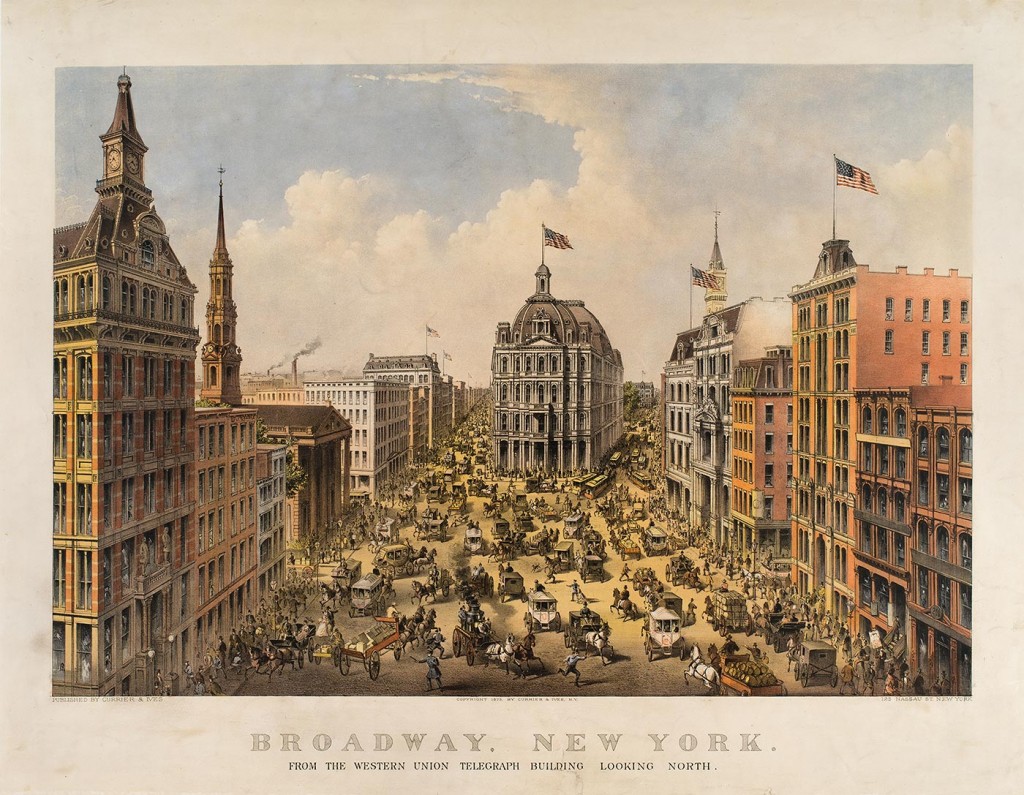 As the essays in this publication have so richly conveyed, new technologies and new genres revolutionized the business of making images for public consumption. But technology did not itself cause the dramatic rise of the lithograph, photograph, and newspaper illustration in conveying images of urban life.  It was that heady mix of culture and commerce in making and distributing these products that marked American cultural production in general and New York in particular.  Although the first generation of British artists and German lithographers who crossed the Atlantic seeking commercial success brought the aquatint and the lithograph to an American market, they did not always meet with financial success, as William Bennett’s, Victor Prevost’s, and August Kollner’s careers demonstrated  (see Fister, “From Second Empire to the Empire City”; Gardner, “The Spectacle of Commercial Chaos and Order”). But they did firmly establish New York’s central role in the business of making New York’s urban growth from the bird’s-eye or the street-level view into familiar images, which became commercially viable for later mass-market entrepreneurs such as Edward Anthony and Nathaniel Currier. These producers and their contemporaries found a ready supply of young men and women to work in their Manhattan manufactories. (see Behind the Scenes and Spofford,  “Prosperous Partnerships”) Despite the mounting number of lithographs and stereoviews produced by those shops, these were not industrial factories with steam-powered machines, but were manned by many poorly paid employees working at high speed. Eventually, some institutions did embark upon machine production, as Currier & Ives turned to steam power toward the end of the century and Harper & Brothers converted to mass production in their cast-iron building on Pearl Street.  Although New York did become a manufacturing mart with prominent sugar refineries, the city never looked like Lowell, Masssachusetts, with its low-slung factory buildings, or Pittsburgh, with its belching steel mills. But it was the mass of smaller-scale producers of clothing, furniture, or photographic images that marked the distinctive mode of New York’s manufacturing sector until the deindustrialization that followed World War II. 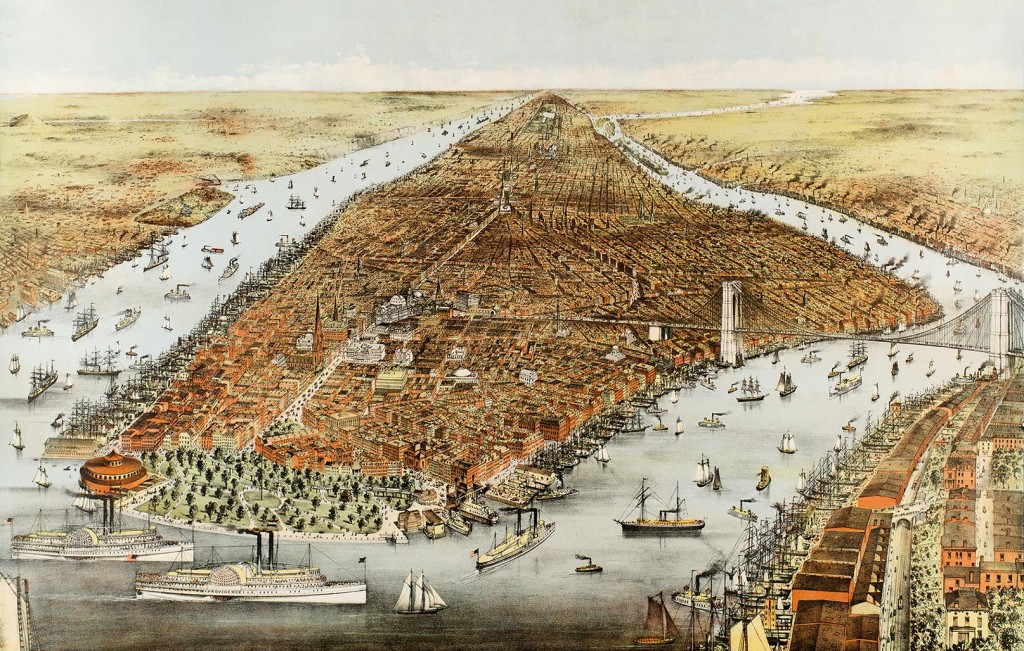 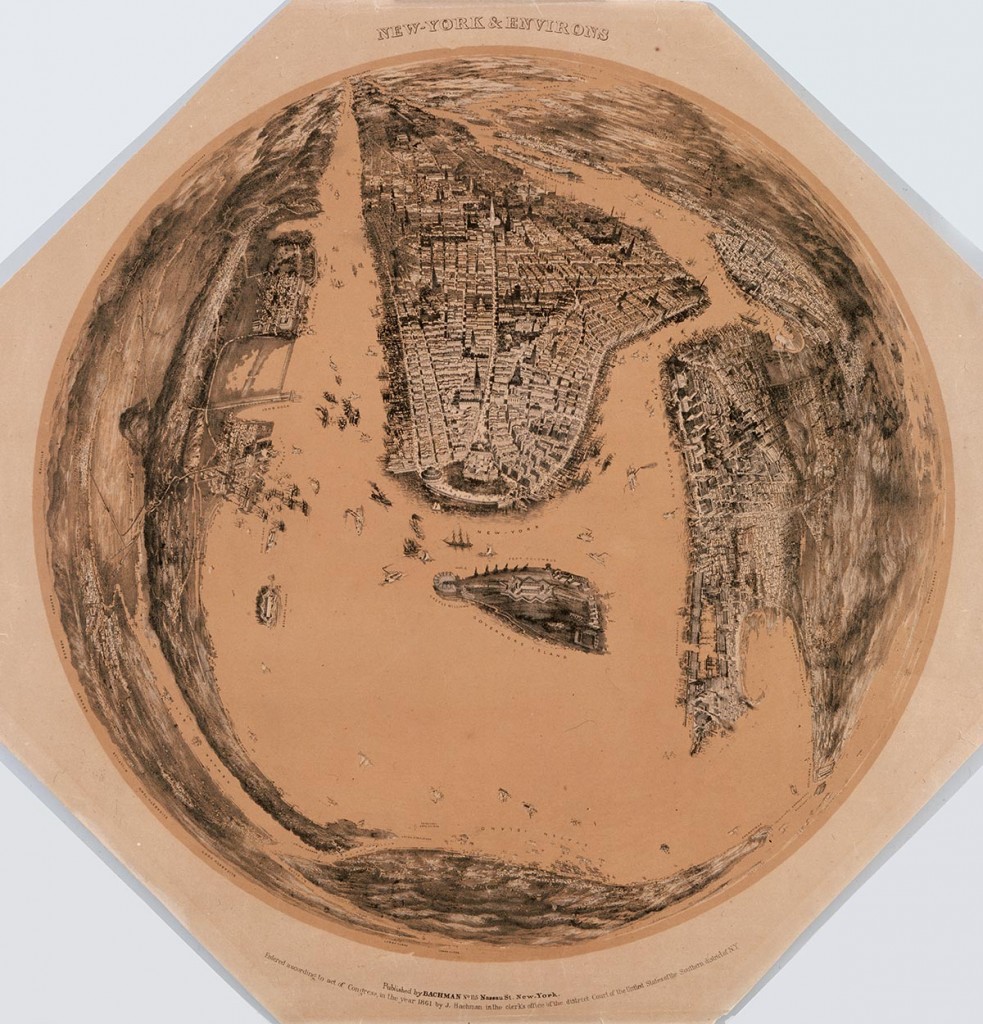 The changing use of space distinguished New York City in the nineteenth century. The city’s population grew from 120,000 in 1820 to more than 800,000 in 1860 and then 1,200,000 in 1880. A city hunched in the lower parts of Manhattan stretched north into the upper parts of the island and a larger metropolitan region developed by the later decades of the century, as we can see in both the 1876 Currier & Ives bird’s-eye view and John Bachmann’s 1859 New York and Environs (figs. 3, 4) (see Purtich, “From Stone to Street”; Kinney, “John Bachmann’s New York”). Density in such neighborhoods as Five Points drew critical attention; for example, the Bowery’s Old Brewery, an overcrowded tenement, housed more than a thousand people.  Steeple views, such as the 1848 Papprill-Hill print (fig 5) based upon a “real” vantage point, (see Kelly-Bowditch, “The Papprill-Hill View”) gave way to bird’s-eye views that converted the city into a kind of concrete abstraction, displacing the profusion of sensory experience at the street level with a detached view from above and making the whole city more comprehensible, a process aided by individual features located along the borders joining particulars to whole, as in John Bornet’s Souvenir of New York (fig. 6) (see Kinney, “Framing the City”).1 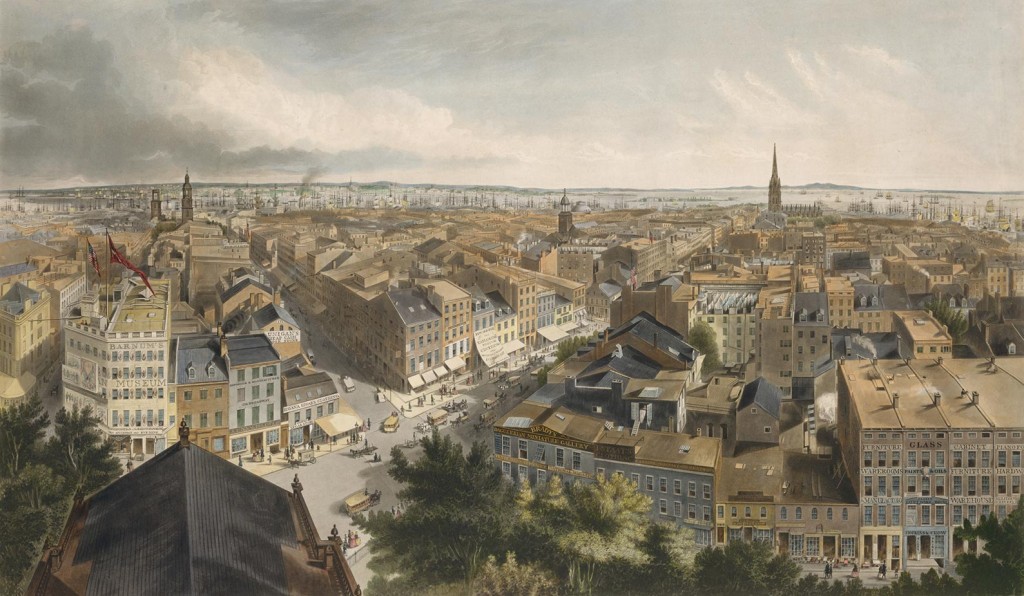 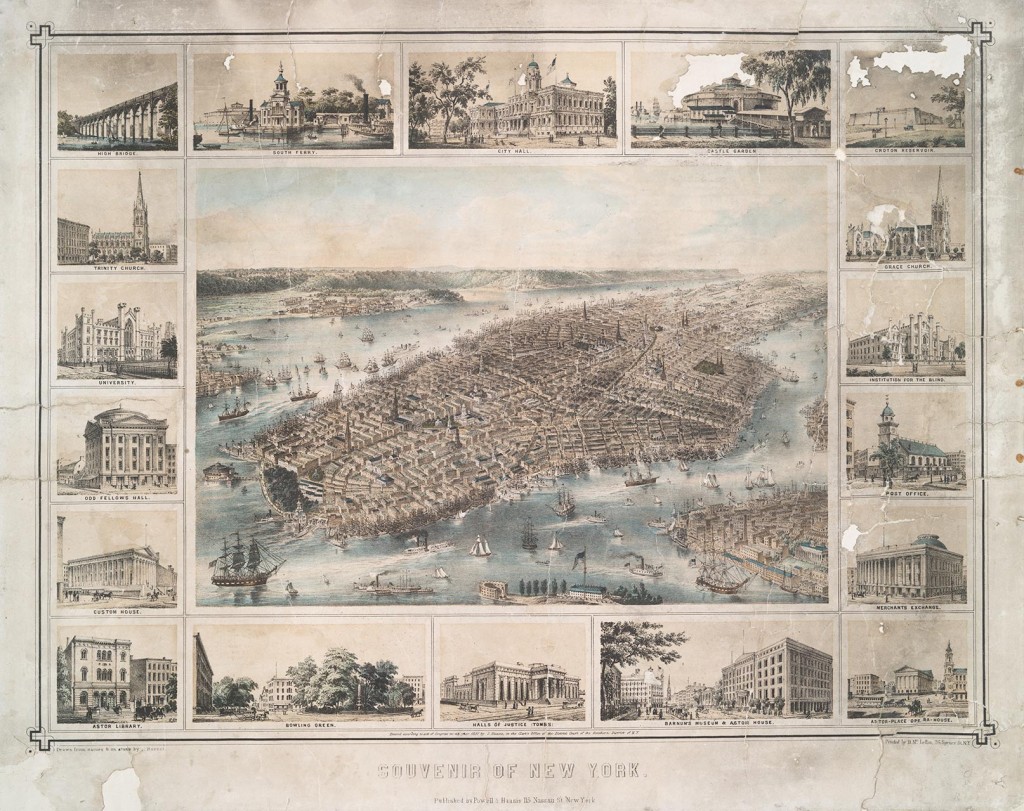 The new popularity of illustrated periodicals, such as Harper’s Weekly, promised a “faithful picture presenting an everyday scene” by their artist correspondents. This new fashion for illustrated periodicals was based on a growing appreciation for the visual quality of urban life. The pictorial press did occasionally print bird’s-eye views, but it was their streetscape views that attracted the most notice by adopting what historian John Kasson has called “the mole’s view,” an inside view of the chaos and divisions.2 In Thomas Hogan’s Harper’s Weekly illustration “Up Among the Nineties” (fig. 7), the stylishly dressed toffs enjoy their ice cream in a parlor-like setting, which the accompanying text refers to as an “elegant saloon,” while poorly clothed children have their treats in the open air or at the “nuisances of street eating-counters.” The text pronounces that “[e]very citizen of New York will recognize instantly the accuracy of the picture; nothing could more clearly convey to the minds of the thousands of distant readers, who are always wishing to know more about New York, the vast difference between the two great streets, and the two great classes of the metropolis.”3

What was invisible to the ordinary citizen or visitor because of its shadowy existence or because it was omitted in the bird’s-eye or panoramic views, had first been brought into print by a wealth of subterranean accounts that appeared in such guidebooks as George Foster’s New-York by Gaslight or John McCabe’s Secrets of the Great City. However, this depiction of the city attained its most vivid and visual form in the illustrated periodicals (see Fister, “Sunshine and Shadow”).4 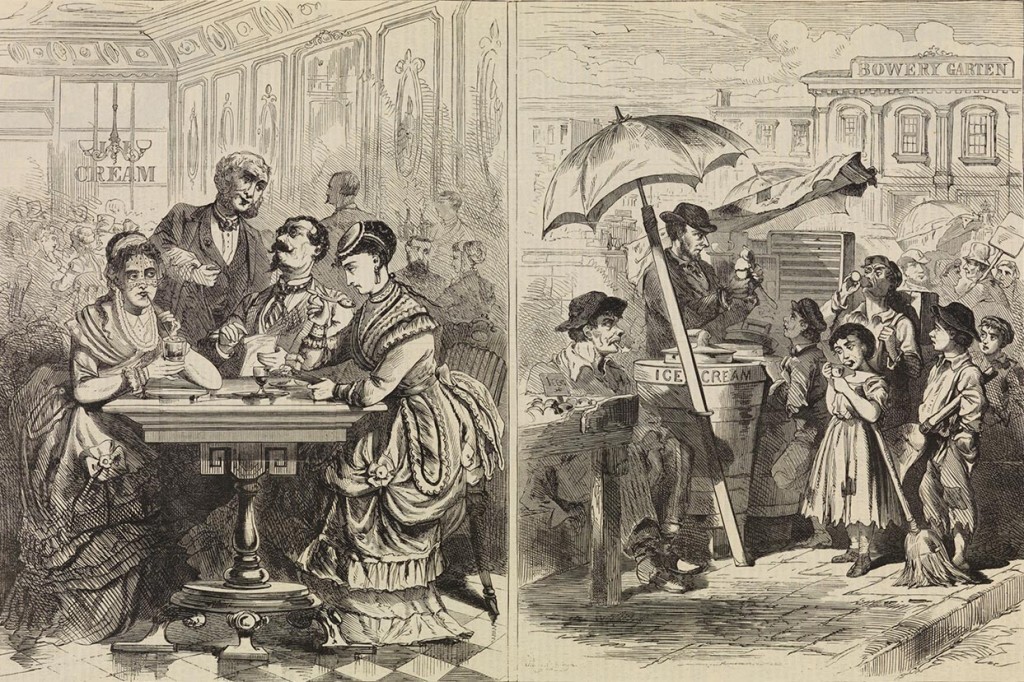 As the essays make abundantly clear, the infrastructure of culture—how culture was delivered through commercial channels and institutions—mattered greatly in nineteenth-century New York.  P. T. Barnum’s American Museum and A. T. Stewart’s department store, the “Marble Palace,” made frequent appearances in the visual record, but they represented only the tip of the iceberg in New York’s surging importance as an emporium of culture and commerce. Barnum in his promotion of Jenny Lind, Tom Thumb, and other popular attractions sought ever-larger audiences, and in a city of ever wider social divisions, all classes flocked to Broadway and Ann Street for entertainment as well as shopping. The owners of these enterprises, including the daguerreotypist Mathew Brady, took advantage of the new culture of celebrity that they had helped to create by exploiting the mass circulation press and the burgeoning middle-class market (see McRee, “Mathew Brady”; Kelly-Bowditch, “Barnum’s American Museum”). But there were many other stores and entrepreneurs that made New York and Broadway the commercial center depicted in Hornor’s aquatint of Broadway and Canal (fig. 8) or that spilled out into other areas, such as Chatham Square (see Gardner, “The Spectacle of Commercial Chaos and Order“; Friedman-Stadler, “The Chatham Square Daguerreotype”). These stores offered a new culture of display where residents and visitors could learn from storefronts about new fashions and products, and this ultimately gave rise to New York’s role as the crucible of that new consumer culture (see Brow, “Fashion and Urban Living”; Friedman-Stadler, “The Spectacle of Downtown Broadway”; McRee, “Navigating the Street Environment”; Purtich, “Palaces of Consumption”). 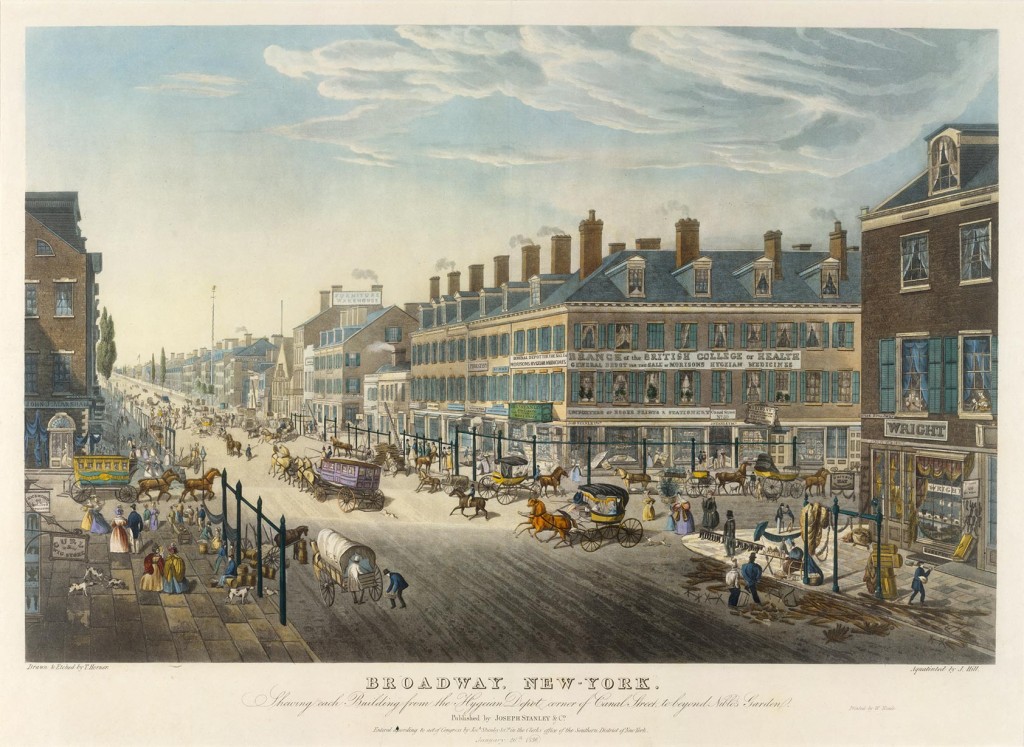 One of the significant conclusions reached by our study of visual images in nineteenth-century New York is that class mattered. The popular theme of “The Two Great Classes of the Metropolis” was dramatic visual and literary fodder for scenes of plenty and poverty, of sunshine and shadows, and helped to establish the careers of writer George Foster and illustrator Winslow Homer, among others. It was the thick band of the growing middle class, however, that represented the prime market for the “Printmakers to the American People,” as Currier & Ives called their firm, or the hundreds of thousands of subscribers to Harper’s Weekly. That middle class provided the bulk of the visitors and residents who used guidebooks and prints to navigate the streets of New York and to comprehend the complexities of the growing urban world of the nineteenth century. It was the middle class that bought the illustrated newspapers with images of the rich frolicking at society balls or the poor huddled in dismal dwellings and that flocked to new stores for commodities such as John Rogers’s sculptural figures and middling parlor furniture (see D’Amato, “Furnishings and Factory Life”).  People went to commercial centers to see and be seen and to understand themselves as a class in such genteel settings such as Brady’s Daguerreian Gallery, Central Park, and the Crystal Palace exhibition. That process of class consolidation entered the home by purchasing and displaying of lithographs, photographs, and illustrated periodicals in middle class parlors.

Currier & Ives, Edward and H. T. Anthony, Harper & Brothers, and their fellow image producers actively shaped the domestic cultural configuration that constituted middle-class culture in the post-Civil War era. Their visual products offered increasingly standardized images of the city, only occasionally disrupted by disquieting events or individuals, such as the fires that demolished Barnum’s American Museum or the Crystal Palace. Those images circulated to a national, indeed international, market, and New York came to signify the modern commercial city, one to be sure with divides between the classes, but also with exciting visions of bustling streets and panoramic metropolitan vistas.