The street loomed large in the imaginations of nineteenth-century New Yorkers and visitors alike and played a key role in their understanding of the city. Frequent depictions in the press and vivid descriptions in guidebooks attest to a fascination with the street as a microcosm of urban life. The artists and authors of these images and guidebooks provided subjective interpretations of the street environment, and thanks to the explosion of print and visual culture in nineteenth-century New York, they wielded significant power in shaping how people envisioned the city street. This essay explores the interaction between image and text, and the ways in which people navigated the geography, social environment, and dangers of the streets of nineteenth-century New York.

During the mid-nineteenth century, the city introduced improved technologies to the street environment but struggled to keep pace with rapid population growth; between 1840 and 1860, the city’s population increased by 250 percent.1 By 1828 most roads up to Thirteenth Street were paved and lighted by gas lamps; by midcentury, pavement and lighting reached Madison Square.2 The city experimented with various paving materials, including cobblestones, wood, concrete, and stone blocks embedded in sand. All of these materials, however, soon grew slippery and uneven when exposed to the city’s heavy traffic, leading to frequent complaints about street conditions.3 Guidebook author George Foster recalled “[riding] over its dusty billows until we got thoroughly sea-sick.”4

Before the establishment of public sanitation, the cleanliness of the streets varied widely and sometimes posed navigational challenges. Street sweeping was privately managed, as was snow clearing, so only elite neighborhoods enjoyed reliable access to clean streets.5 In other neighborhoods, owing to the expense of transporting waste out of the city, refuse accumulated on the streets and remained there for long periods of time.6 Moreover, the bumpy street surface caused vehicles to rattle, creating considerable noise, which was intensified by the cries of street peddlers. 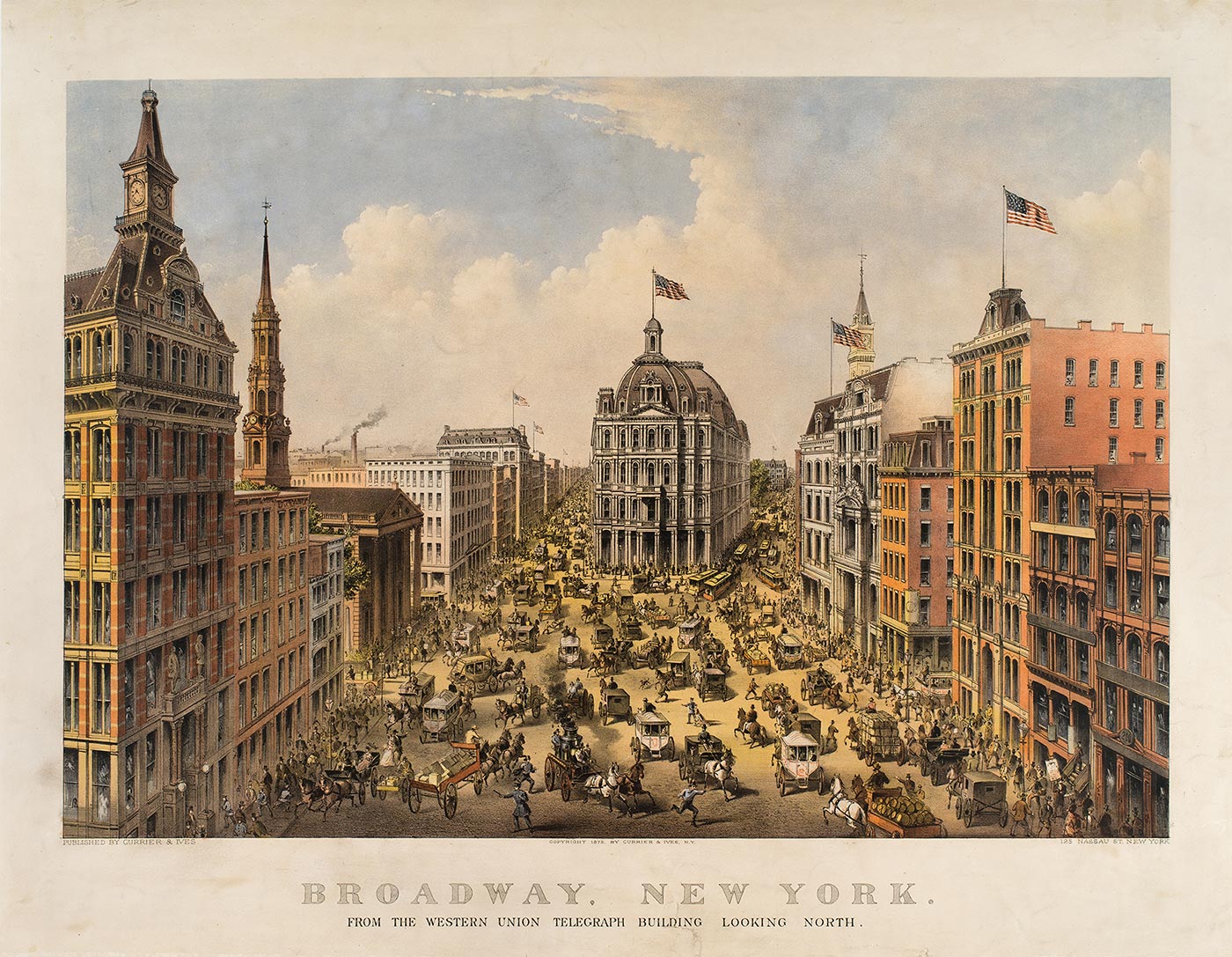 The 1875 Currier & Ives lithograph Broadway, New York. from the Western Union Telegraph Building, looking North (fig. 1) focuses on the chaos typical of a major thoroughfare. Diverse types of vehicles travel the street, including passenger carriages and wagons hauling commodities such as lumber into the city for sale. A police officer directs traffic, and a handful of daring pedestrians attempt to cross the street. An 1861 document explains the traffic system governing the haphazard movement of vehicles in this image: “The capacity of Broadway to accommodate an amount of travel so vast, arises from the fact that vehicles can turn out of each other’s way, that their movements are regulated by police, stationed at all important points, and that none of them are entitled to occupy any particular portion of the street . . . [or have] the right to compel others to keep out of the way.”7 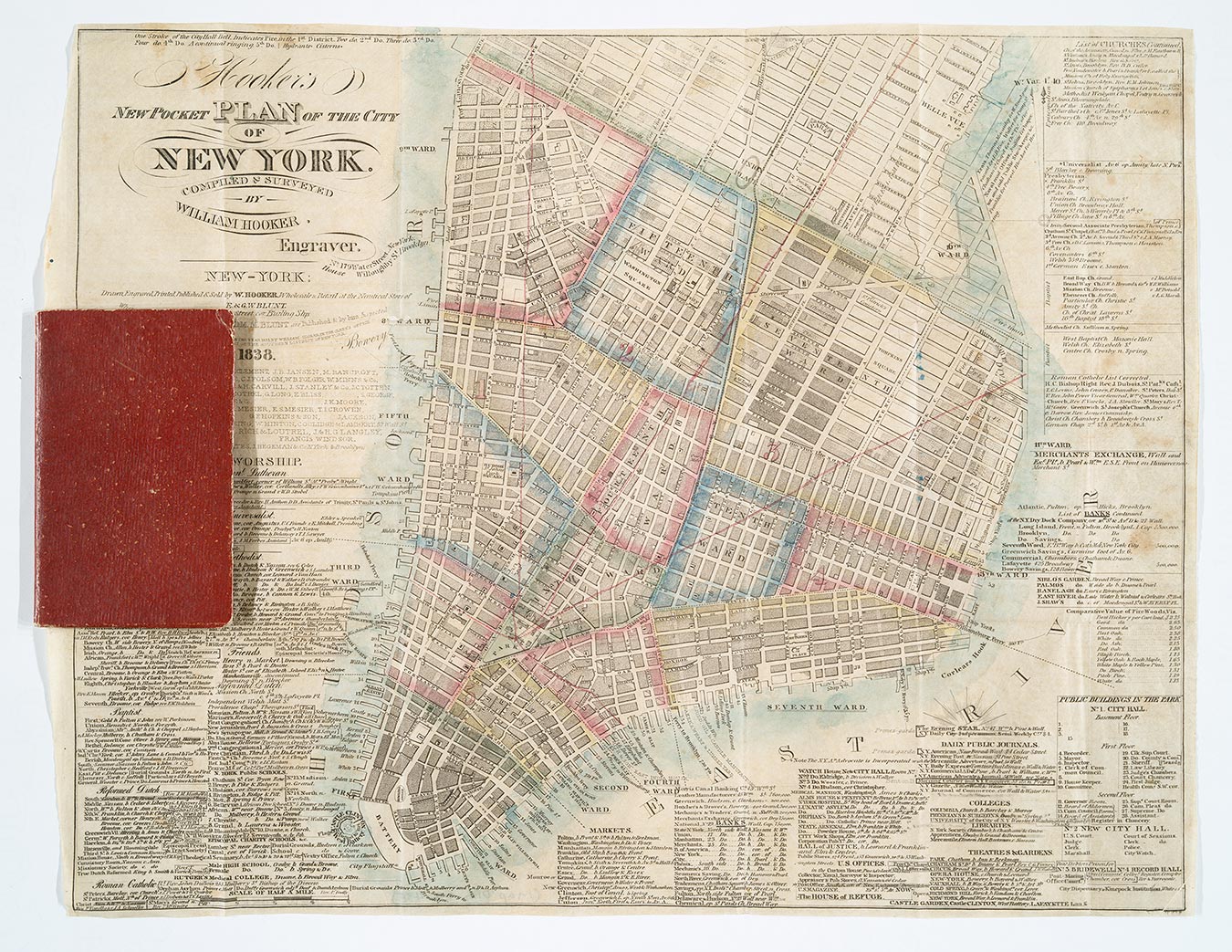 Maps, guidebooks, and public transportation helped people navigate the city. Maps such as this 1838 pocket map (fig. 2) allowed individuals to visualize their location within the city; unlike Matthew Dripps’s enormous 1851 fire insurance map, this map conveniently folded to a small, portable size. Because there was little clear street signage at the time, this type of map would have been particularly helpful in an unfamiliar part of the city: street signs were so uncommon that many New Yorkers relied on commercial signage as landmarks instead.8 Guidebooks also helped visitors and residents alike understand the city’s geography by offering detailed descriptions of various neighborhoods. More sensationalist than many of the artists discussed in this essay, guidebook authors often employed exaggeration and hyperbole to convey the enormity and busyness of the city. In 1852 William M. Bobo described the city as “one grand kaleidoscope in perpetual motion, with the views passing so swiftly by that one is hardly seen before another is presented,” and in 1868 James McCabe called Broadway “the most wonderful street in the world.”9

Public transportation, lauded by some guidebooks and castigated by others, enabled many people to travel the city with relative ease. The omnibus, a horse-drawn carriage that provided inexpensive transportation, was one option. In his 1849 guidebook, New York in Slices, George Foster praised the omnibus, claiming that from the Astor House he could see about fifteen going in each direction every minute. He referred to the omnibus as “our beautiful Carriage for the Million” and maintained that its convenience and affordability compensated for its sometimes crowded state.10 The horse railway, a horse-drawn car that ran on railroad tracks and could go up to twice as fast as a stagecoach, offered another transportation option.11 In 1850 New York had one horse railway line, but by 1875 eighteen companies offered service on almost every major street.12 Junius Henri Browne, writing in 1868, took a more cynical view of public transportation than Foster. He described the horse railway as “purgatory,” advising that “the regular passenger should lose his sense of smell; have the capacity to shut himself up like a patent umbrella; [and] be able to hang on a platform by the lids of his eyes.”13

The heterogeneous social dynamic of the street challenged nineteenth-century New Yorkers to navigate a complex social landscape. By 1850 almost 60 percent of New Yorkers were foreign born, and individuals from all socioeconomic classes lived in the city.14 Busy streets such as Broadway attracted individuals from diverse social classes and ethnic groups. Browne described Broadway as, “cosmoramic and cosmopolitan. In its vast throng, individuality is lost, and the race only is remembered. All nations, all conditions, all phases of life are represented there.”15 Social typing, a practice where a class, occupation, or ethnicity was reduced to a single, popularly recognized stereotype, helped New Yorkers more easily comprehend the complicated social street environment.16

The clothing and behavior of individuals on the street also provided clues indicating social class, transforming public self-presentation into a coded performance that communicated social status.17 By the mid-nineteenth century, middle- and upper-class whites and African-Americans took part in Sunday morning promenades on Fifth Avenue, which had become a popular place to display one’s fashion and wealth.18 Moreover, as carriages became more affordable, the pastime of driving on the avenues also gained popularity and offered another opportunity to show off one’s status.19 Foster explained, “[While driving] everyone is on an equality, save that whoever has the fastest horse is the best man. The aristocratic dandy of the Opera, the spendthrift clerk from Front-street, the flashy sporting-man with his unimpeachable turn-out, all go the same road and appear on the same level. Social inequalities are, like the avenue itself, Macadamized.”20 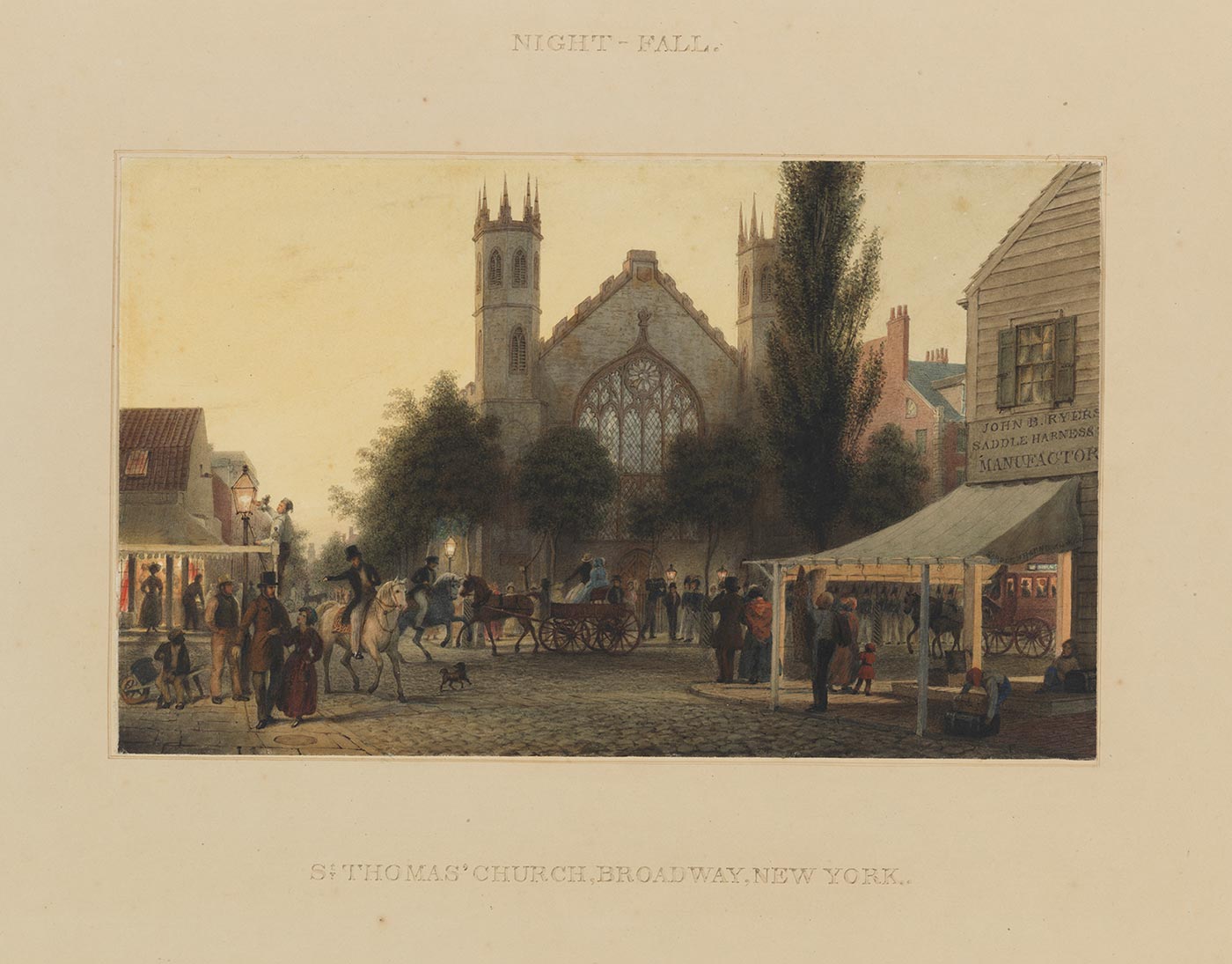 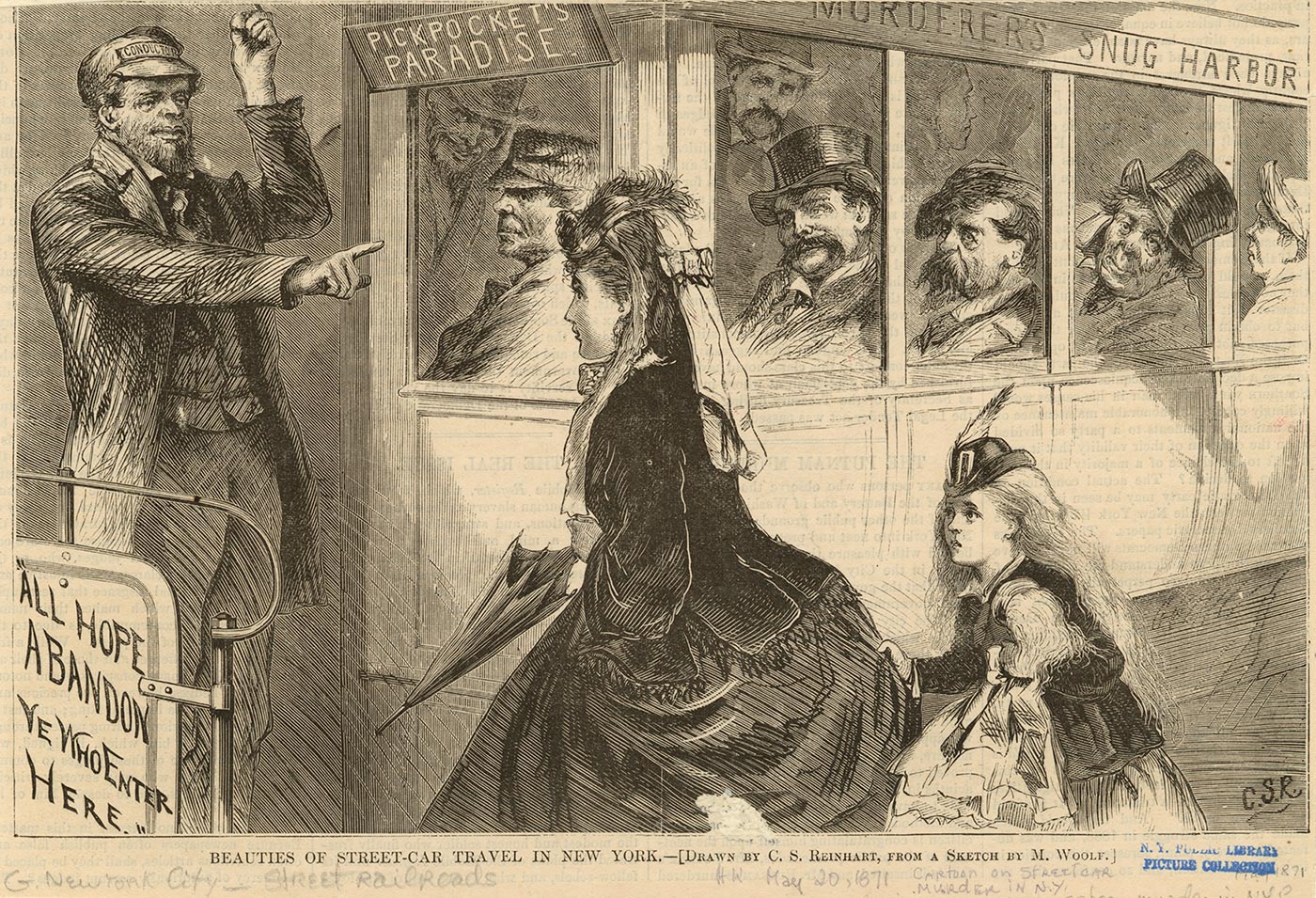 George Harvey’s 1837 watercolor Night-Fall, St. Thomas’ Church, Broadway, New York emphasizes the sociability of the street environment (fig. 3). In the foreground of this evening scene, a lamplighter works to illuminate the streets, providing light for respectable social interactions. Passengers and pedestrians gaze at one another, assessing each other’s fashions and social status. On the far right, an omnibus drives by, likely carrying individuals from varying social groups. In contrast to the bustling traffic seen in the Currier & Ives lithograph (see fig. 1), here Harvey has chosen to depict the street as a calm and orderly social space.

Individuals also needed to be aware of potential dangers when navigating the streets. In the initial pages of his guidebook, McCabe explained that he hoped “to warn the thousands who visit the city against the dangers and pitfalls into which their curiosity or vice may lead them.”21 Even everyday activities, such as crossing the street, could be risky. Bobo warned that crossing Broadway could be “at the peril of your life or limbs,” relating an anecdote of two young ladies who became separated on opposite sides of the street for an hour before the traffic eased enough for them to be reunited.22 At some of the busiest sections of Broadway, walking bridges enabled pedestrians to safely cross the street.23

New Yorkers feared crime in the street environment.24 In the image “Beauties of Street-car Travel in New York,” published directly after a spike in crime, a well-dressed mother and daughter board a streetcar filled with leering men (fig. 4).25 All streetcars displayed signs warning riders to beware of pickpockets, but here the artist has depicted signs that read “Pickpocket’s Paradise” and “All hope abandon ye who enter here.”26 This satirical exaggeration, a typical tactic of guidebook authors, played on popular fears about crime in the city. Similarly sensationalist, Browne warned his readers to be wary while on streetcars, claiming that “New-York is the best place in the World for pocket-picking.”27

Middle-class New Yorkers also experienced anxiety at the prospect of social disorder or entering neighborhoods associated with other social classes, such as the Bowery. The Bowery’s reputation as a less upscale, less refined version of Broadway was troubling according to Browne, who wrote, “Order, and form, and caste, and deference, shaken and confused in Broadway, are broken into fragments in the Bowery, and trampled under foot.”28 Similarly, the middle class believed that the neighborhood of Five Points, an industrial area that housed many of the city’s poorest immigrants, was a center of crime and immorality. Recent archaeological research has demonstrated, however, that Five Points was simply home to the working poor and that period accounts of crime in the area were exaggerated.29

Image makers and guidebook authors employed the street environment to represent both the best and worst aspects of urban culture. Often drawing on popularly recognized city tropes such as traffic jams, fashionable sociability, and crime, these individuals both created and reinforced the image of the street as an iconic symbol of New York City.